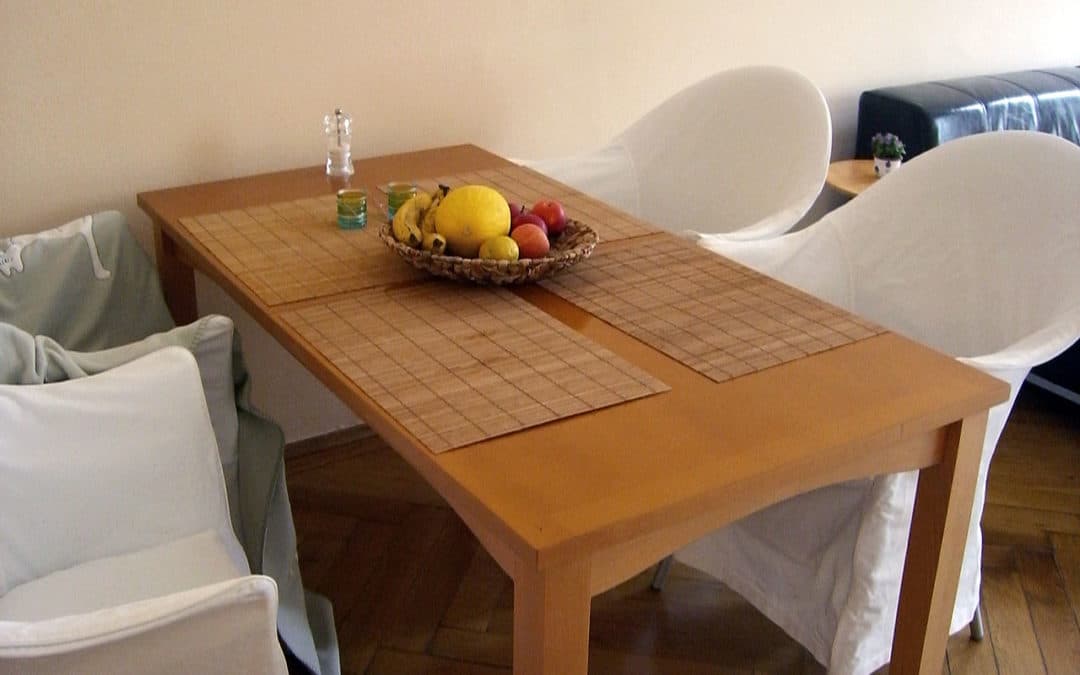 Jacqueline asked me to produce this beginner’s show. She wanted to know what the furniture in a room is called in German. So let’s start our tour through a virtual apartment. If you enter a typical German apartment, you open the door, die Türe, die Türe, and get into a corridor. It is called Flur. Here you can take your shoes off and put your coat on a hanger. The place to store your shoes and coat is called Garderobe. Garderobe. It is the cloakroom. But now off on our tour!

We start with the living-room. It is called Wohnzimmer in German. Wohnzimmer. In the living-room there’s usually a place to sit, for example a couch. We also call it a couch in German. Or sofa. If you sit on a sofa and want to drink something, you put it in front of you on a small table. That table is called Couchtisch. Couch-Tisch.

In some living-rooms there’s also a space for dining. But many homes have a separate area that is called Esszimmer. Dining room. Ess-Zimmer. The main piece of furniture here is a table. It is called Tisch in German. Tisch. You sit at a table. And you sit on chairs. Chairs are called Stühle. One chair is a Stuhl. More chairs are Stühle. Stühle.

What more is there to tell you? If you want to store your books somewhere, you put them on a shelf. A shelf is a Regal. Regal. I think that’s enough for today. Have fun learning German!

This website uses cookies to improve your experience while you navigate through the website. Out of these, the cookies that are categorized as necessary are stored on your browser as they are essential for the working of basic functionalities of the website. We also use third-party cookies that help us analyze and understand how you use this website. These cookies will be stored in your browser only with your consent. You also have the option to opt-out of these cookies. But opting out of some of these cookies may affect your browsing experience.
Necessary immer aktiv
Necessary cookies are absolutely essential for the website to function properly. These cookies ensure basic functionalities and security features of the website, anonymously.
Functional
Functional cookies help to perform certain functionalities like sharing the content of the website on social media platforms, collect feedbacks, and other third-party features.
Performance
Performance cookies are used to understand and analyze the key performance indexes of the website which helps in delivering a better user experience for the visitors.
Analytics
Analytical cookies are used to understand how visitors interact with the website. These cookies help provide information on metrics the number of visitors, bounce rate, traffic source, etc.
Advertisement
Advertisement cookies are used to provide visitors with relevant ads and marketing campaigns. These cookies track visitors across websites and collect information to provide customized ads.
Others
Other uncategorized cookies are those that are being analyzed and have not been classified into a category as yet.
SPEICHERN & AKZEPTIEREN